Man Charged with Attempting to Elude a Law Enforcement Officer 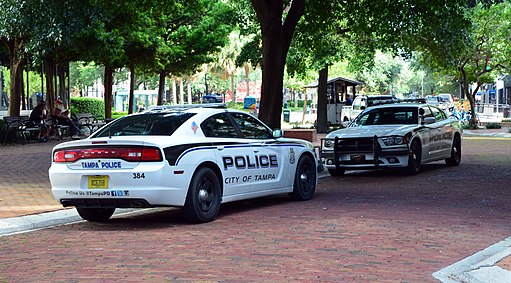 A Florida man recently learned there are serious consequences for fleeing from law enforcement!  According to the Tampa Bay Times, it all started when sheriff’s deputies in a marked car attempted to pull over the driver of a 2004 Chevy Malibu who, according to the deputies, was speeding. Instead of stopping, the driver sped up in an attempt to evade the officers.
The deputies decided not to give chase and instead, contacted a sheriff’s helicopter that was able to spot the Malibu. Once the deputies caught up with the Malibu, officers once again tried to pull over the driver, with same result as before: The driver sped up to avoid the officers, and the call was made not to initiate a high-speed chase.
Meanwhile, a young police officer was patrolling an area close by at the same time, possibly unaware of the chase happening with the Malibu. As he drove through an intersection, the Malibu slammed into the passenger side of his vehicle, pushing him into a parked sports utility vehicle and slightly injuring the officer.
Undaunted, the Malibu driver got out of his car and started running away, but was quickly stopped and arrested. Both the police officer and Malibu driver received medical treatment for minor injuries. The Malibu driver was charged with:

If convicted of these fleeing and eluding charges, the man faces up to 15 years in prison, a fine of up to $10,000, potential forfeiture to the state of his vehicle, and revocation of his driver’s license. He will also have a felony conviction on his record with all the consequences that ensue.
In addition to all the penalties imposed, those sent to prison for eluding a law enforcement officer are not eligible for any Florida “gain time.” Gain time means that every month spent in prison, a prisoner can earn 10 days off his sentence for good behavior. This means that a person serving a 15-year sentence could earn enough gain time to be released after serving 12.8 years. But, someone convicted of eluding or aggravated eluding a law enforcement officer will serve the entire 15 years. Their only hope for early release is clemency or a pardon from the governor.
The outcome for this particular driver is not yet known. He may have defenses to the charges based on circumstances of the case that have not been revealed to the media. A skilled criminal defense attorney may be able to negotiate for him to plead guilty to lesser charges so his penalty will be reduced and he may not have to serve the maximum 15-year sentence.